As a child in Somalia, Zakariya Mohamud remembers ducking for cover one day when a gun battle was raging in the street outside his family home. 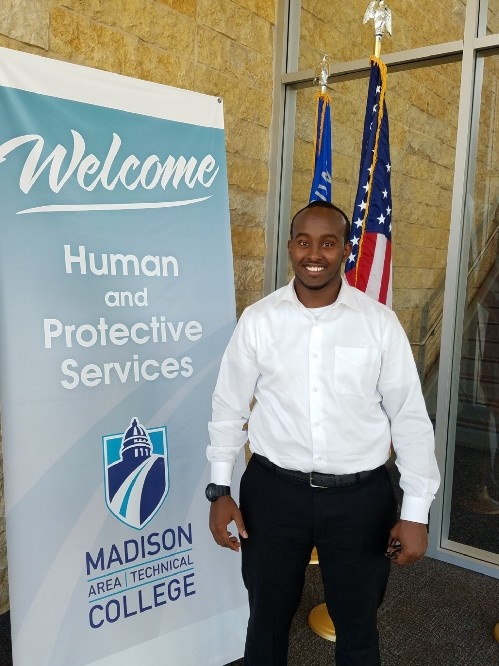 “Bullets were coming through the wall,” he said. Because of corruption, citizens didn’t know if they could trust the police and criminals were not always held accountable for crimes. Neighborhood protection came from security guards at a nearby mosque.

Mohamud has seen first-hand what a lack of law enforcement can do to a society and he wants to be part of the solution to the mistrust of police officers in this country. That’s one reason he enrolled in the Criminal Justice — Law Enforcement degree program at Madison Area Technical College in Madison, Wis.

“I look on law enforcement as a necessity in today’s society,” said the part-time student.

Recently, Mohamud received a $2,750 scholarship from the Madison Professional Police Officer Association and the Association of Madison Police Supervisors. The scholarship includes an internship and department mentor.

Because of the violence and political instability in Somalia, Mohamud’s parents brought the family to the United States when he was eight, so the children could escape danger and get a good education.

Mohamud wants to help others. While growing up in Minnesota, he remembers seeing American police officers helping people and that’s another reason he wants to join their ranks.

Contrary to Somali culture, Mohamud was eager to move away from his parents and become independent. He came to Madison for the law enforcement program at Madison College and for a baggage handling job with Delta Airlines at the Dane County Regional Airport.

After enjoying the airline travel benefit for a while, Mohamud wanted to gain more relevant experience so he joined JBM Patrol and Protection, a contract protective services company. He works third shift patrolling businesses and City of Madison parking ramps.

When he encounters fights downtown Mohamud knows how to detain uncooperative individuals and react when he is threatened. He carries only pepper spray and a baton, not a weapon.

“Working in private security makes me appreciate that I can call police when there is trouble and they will take it from there,” he said. Recently, he got a second job with Gardaworld, a secure transportation company.

While Mohamud has had some negative encounters with other African Americans who called him a hypocrite for wanting to serve with law enforcement, most of the time he gets compliments.

When he hears about cases of questionable police behavior, Mohamud says he can see both sides of the issue. “You have to look at [these incidents] from all perspectives before you judge.” However, if an officer is in the wrong Mohamud feels they should be held accountable.

As for facing the dangers of law enforcement, Mohamud says, “If you worry about tomorrow, it will affect how you live today. And you can’t think about what happened yesterday either. You just have to live each day as it comes.”

Mohamud’s only thoughts for tomorrow are finishing his associate degree and transferring to UW-Madison to study psychology. He wants to stand out from other candidates when he applies for law enforcement positions.