Sarah Barron thought going back to school would be “a terrible mountain to climb.” After earning a bachelor’s degree in Asian Studies at the University of California-Santa Barbara, Barron taught English to elementary, middle school and high school students in Japan for three years. 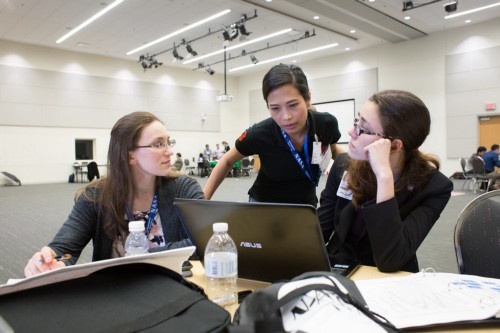 Upon realizing there were not many jobs involving her language skills that appealed to her, Barron began to consider other career options. At 27, she decided to study electrical engineering at Madison College and to learn more about alternative energy. She was referred to instructor Dr. Ken Walz, a nationally renowned expert in the field.

Barron entered the Honors Program in the summer of 2015, and began to work on her project with Walz as her faculty supervisor. The goal was to create an undergraduate curriculum involving non-silicon solar cells. To do that, she had to take the complicated and make it accessible.

“These Perovskite solar cells are not commonly used, but are going to be a big deal in the industry,” she explained. “They have [relatively] low production costs, are relatively simple to manufacture and are made using abundant materials.”

Barron presented her work on the solar cells at the Advanced Technological Education Principal Investigators Conference in Washington, D.C. She also took first place in the Madison College Honors Competition and represented the college at the Regional Honors Council Conference in Iowa.

In addition, she was selected through a competitive process to participate in the National Air and Space Administration Community College Scholars Program. This interactive online learning opportunity wrapped up with a four-day experience at NASA. Her team won first place in the competition, which involved designing, building and demonstrating a model of the Mars Rover.

Barron is transitioning to the University of Wisconsin-Platteville to pursue an engineering degree.