Sisters inspire each other, graduate together

As children of Mexican immigrants, Nancy and Elizabeth “Liz” Quezada always thought college was unreachable for them. Their parents hadn’t even graduated from high school and didn’t know anything about higher education. 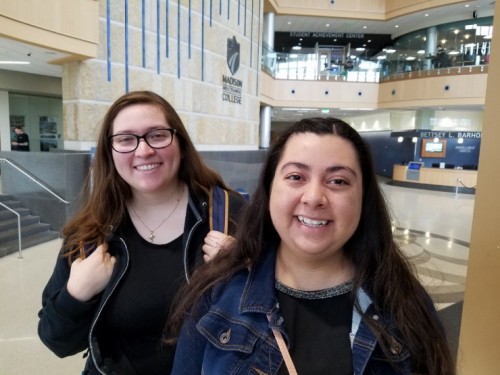 Madison College changed all that and on May 12, 2017 the sisters both graduated with associate degrees.

After graduating from Oconomowoc High School, Oconomowoc, Wis. in 2011, the Quezada sisters went to work in a bearing factory making low wages. While searching online for fashion marketing programs, Nancy learned that Madison College offered a Fashion Marketing degree and had a campus in Watertown, Wis. When she discovered she could qualify for financial aid, Nancy decided to quit the factory and enroll. Soon after, her family moved to Watertown.

“I was always interested in fashion,” Nancy said. “Selena’s style inspired me to own who I am as a Mexican American.” Selena Quintanilla was a singer, songwriter, model, actress and fashion designer who was killed in 1995 by the manager of her boutiques.

Lindsay Leno, a Madison College instructor who owns UpShift Madison clothing swap shop took Nancy under her wing, gave her good advice and encouraged her to pursue her dreams of having her own clothing line.

Unlike her sister, Liz didn’t have higher aspirations or a specific career goal. Negative experiences were piling up at the factory until she couldn’t wait to leave. “They had horrible working conditions, and the difference in pay between the men and women was ridiculous,” she said.

In January 2015, Liz enrolled and started taking classes without a clear goal. Soon she discovered the Visual Communications program was perfect for her varied interests. Her courses included video, audio and graphic design.

“Originally, I wanted to become a producer for other people’s projects, but I’ve fallen in love with travel and now I’d like to produce my own video travel series,” she said.

Nancy drove Liz to the Truax campus for her classes and was a cheerleader to her sister.

“I have had moments when I thought I couldn’t do it, or I thought I wasn’t good enough,” Liz said. “She always helped me believe in myself.”

Nancy and Liz Quezeda have always done things together and they walked across the stage in their caps and gowns to receive their college degrees together. Something neither one thought was possible six years ago.