A graduate of the U.S. Naval Academy, Andrew Allison understands the workings of a nuclear submarine, but he didn’t know how to use a torque wrench until he came to Madison College. 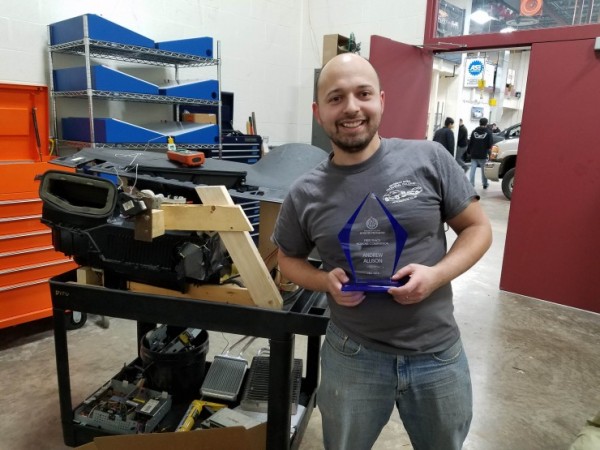 After graduating from high school in New Jersey, Allison chose the Navy because of the good pay and benefits for working on a submarine. He earned a bachelor’s degree in mechanical engineering at the academy in 2010, then spent one year in training and three years on a ballistic missile submarine.

Despite the confinement, Allison enjoyed being part of a crew and learning new things.

As an officer he got to look through the periscope from time to time and hear whales on the sonar. “We didn’t have to experience Wisconsin winters,” Allison said. “The weather was consistently 72 degrees and fluorescent.”

He became engaged to “a career-oriented lady” during his first year of active duty. She was pursuing a career in higher education.  At that point, Allison’s own career goals changed to focus on applied knowledge of mechanical and electrical systems in automobiles instead of submarines.

Compared with the Naval Academy, Madison College seemed like a dream. Allison appreciated the freedom, more relaxed atmosphere, clubs and activities and close relationships with his instructors. He joined the Honors Program and became a volunteer tutor in the Achievement Center.

For his Honors project Allison applied his engineering and physics knowledge to create an alternative to standard heating and cooling systems in cars and trucks. He designed a thermoelectric cooler and heater to replace the heater core and evaporator under a car’s dashboard. The device could eliminate the need for chemical refrigerants that can cause harmful gases.

Allison enjoyed the process and the opportunity to use his problem-solving skills. He was awarded first prize at the 2018 Honors Competition. Allison was also named to the Phi Theta Kappa All USA Academic Team and received a New Century Workforce Pathway scholarship. He was the student speaker for the Spring Commencement.

In May 2019 Allison graduated with an Automotive Technology degree. He plans to earn Automotive Service Excellence certification, find employment and continue to learn. Eventually he wants to teach others.