Hmong student becomes advocate for others

Kalia Vang’s interest in computers began in high school. She was the only girl in the robotics club. Boys in the club didn’t respect her knowledge and abilities and tried to leave her out of the serious work. 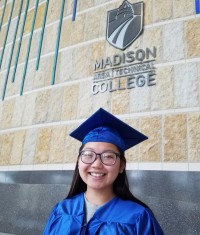 “I formed a team and we took second place in the competition,” she said proudly. That experience fueled her desire to advocate for girls interested in science, technology, engineering and math.

After high school she enrolled at the University of Minnesota to pursue her interest in computer programming. When her immigrant parents lost their jobs and moved to California for work, Vang quit school to provide and care for her four siblings. She worked as a certified nursing assistant and waitress, while making school lunches and dentist appointments. This was the expectation in Hmong culture.

“It made me happy to sacrifice so my siblings could continue in school,” she said. Always looking for the bright side, Vang enjoyed customer service and making people’s day.

A friend who attended Madison College invited Vang for a visit. She came to campus, met some instructors and sat in on a few classes. She loved it.

By this time her siblings no longer needed her support, and a cousin advised her to follow her own educational dreams. Vang moved from Minnesota and enrolled at Madison College as a liberal arts transfer student.

A voice for others

“I noticed there weren’t many Hmong students involved in student organizations,” she said. Vang ran for Student Senate to be a voice for minority students. She noticed other Hmong students in some of her classes were struggling to understand class assignments and began helping them. Next, she pushed the

college to hire Hmong interpreters in the Student Achievement Center to help these students.

Through her involvement with PTK and Student Senate, Vang was appointed to the Student Food Insecurity Impact Team. She worked to include student organizations in the design and implementation of the first Food Resource Fair offered at Madison College. The project earned a Distinguished College Project Award from PTK as one of the top 30 in the world.

“By her leadership, Kalia set an example for other underrepresented student populations to see that it is possible to make a long-lasting difference in the community,” said Steven Ansorge, outgoing Student Senate president. “She is truly compassionate and conscious of the inequality in our world. Kalia is a role model for many people who feel unheard.”

Her advice to others: “Even if you think what you are doing is small, do it anyway. Small changes add up.”