The shrinking supply of effective antibiotics is a worldwide health threat. Madison College students have joined student scientists around the globe to seek new sources for these important medicines in soil microorganisms. 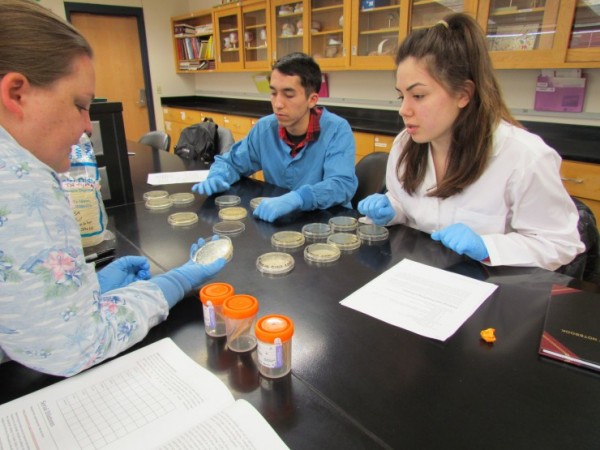 Only a few new classes of antibiotics have been created since the 1970s. Most pharmaceutical companies have abandoned the search due to dwindling profit margins and long timelines for FDA approval.

The Tiny Earth initiative enlists student scientists worldwide in the effort to combat antibiotic-resistant “superbugs.” Organizers hope the experience inspires them to pursue careers in science through real-world laboratory and field research. In January, Madison College instructors Elizabeth Behr, Dr. Kit Carlson and Dr. Alexandra Lerch-Gaggl learned how to incorporate the research into their botany and biology curricula.

Throughout the spring semester 14 Madison College students picked and identified colonies of bacteria and tested them against known pathogens. Their findings were added to those of researchers in 14 countries and 40 states.

“The odds of one individual finding a new antibiotic are low, but with grassroots efforts they are growing,” said Carlson.

The investigation will continue and could pave the way for more undergraduate research experiences at Madison College.