According to a 2012 Department of Veterans Affairs study, more than 20 veterans die by suicide every day in the U.S. Brad Burt could have been one of them. 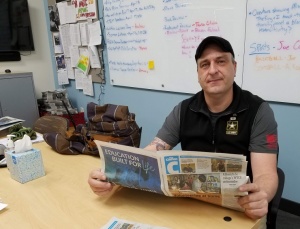 He enlisted in the US Army to fight in the Somalian conflict. After serving in a variety of locations from 1994 to 1997, Burt came home and became a journey worker bricklayer. His next job was at a paper mill. During that time, Burt felt overwhelmed by constant worry, harassed and misunderstood. Workplace stress triggered post-traumatic stress disorder.

Once he was diagnosed with PTSD, Burt was able to get help from the Veteran’s Administration. He discovered the Veterans Integration to Academic Leadership (VITAL) initiative that helps veterans’ transition to higher education.

From soldier to student

In 2017, Burt enrolled at Madison College. A social worker  from VA VITAL met with him on campus each week to ease his adjustment to college. Disability Services provided academic accommodations that also helped the transition.

“I wasn’t ready for college,” Burt said. “This process gave me a second wind as I struggled to get my PTSD under control.”

A change of direction

At first, he wanted to transfer to U.W.-Platteville and become a mechanical engineer. While compiling an annotated biography for his English 1 course, Burt read the stories of three veterans who took their own lives. That assignment altered his goals and direction. Now, he has joined the mission to end veteran suicide.

His articles for the Clarion, Madison College’s student newspaper, and a personal blog focus on veterans’ issues. Burt also wants to help other veterans share their experiences via social media.

Through the Madison College Challenge, Burt developed a business, the 422nd Rescue and Recovery Brigade. He plans to create a documentary series on the hardships veterans face while transitioning to post-military life and make a career of advocacy for veterans.

“Madison College welcomes veterans. The down-to-earth instructors inspire us to become scholars,” he said. “I encourage all veterans to come to Madison College for further education.”

After he completes a Technical Studies Journey Worker associate degree from Madison College and a Journalism certificate from U.W.-Extension, Burt will transfer to U.W.-Whitewater for a bachelor’s degree in Political Science with an eye toward running for Congress.