When Elsa Arellano was growing up in Mexico, only children from wealthy families went to school past sixth grade and usually only the boys were encouraged to continue their education. She and her eight siblings were expected to work to support the family. 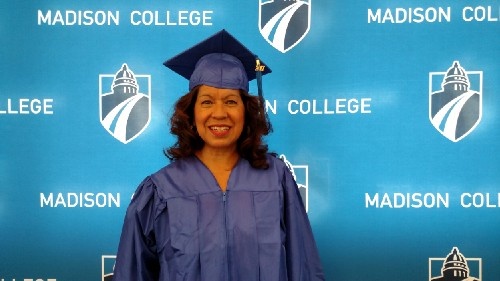 Now, 41 years after coming to the United States, at age 60 she joined more than 250 students who completed their high school diplomas at Madison College in Madison, Wis. this year.

At 16, Elsa started working in an electronics factory. Later she learned to sew and made sweat pants and jeans for American retailers such as JC Penney.

“I had a dream to have my own dress making shop,” she says. But like many young Mexican women, she married and started a family putting her dream aside.

Elsa came to the United States with her first husband and studied English at Madison College’s Fort Atkinson Campus for two years. The couple had three children.

In 1985, she started working at Jones Dairy Farm, producer of sausage, smoked ham and bacon products, in Fort Atkinson, Wis. At that time, a high school diploma was not required for employment. Through the years she held various positions, most recently arranging Canadian bacon for packaging.

For a long time, Elsa wanted to get her high school diploma but didn’t feel she could do it when her children were young. After a layoff at Jones Dairy Farm, she took the GED exams but failed returning to work without a diploma. Finally, after her youngest child left home she decided to try again, for her own sense of satisfaction and to show her grandchildren the importance of education.

Off-and-on for several years, Elsa studied and prepared for the GED examinations, struggling to improve her math and writing skills. Finally, one of her instructors suggested she enroll in the one-year competency-based program with structured classes and independent learning also offered at Madison College.

“It was so different,” said the grandmother of two. “They walk you through it step by step. I had fun.” She learned to use a computer and discovered a love for reading.

One book about the genocide of Jews during World War II left a big impression. “I had no idea all that happened,” said Elsa. She also enjoyed learning about the American government system.

Elsa accomplished her goal and will receive her high school credential from Madison College two years before she plans to retire from Jones Dairy Farm.

“Elsa has been working steadily to complete her diploma and was a wonderful student to work with,” said Michele Scolman-Heizmann, Learning Center lab coordinator at the Madison College Fort Atkinson Campus.

Arellano has become an ambassador for the program, encouraging friends at Elsa to enroll and telling younger coworkers, “You need to finish high school.” The face of construction is changing